Year 5 students from Immanuel Primary School created batik capes inspired by Dennis Golding and the works featured in the 2022 Adelaide Biennial Free/State Studio. These works of art were made for The Future is Here, a collaboration between Golding and Aboriginal and Torres Strait Islander students from Alexandria Park Community School first exhibited at Carriageworks, Sydney.

Born and raised in Sydney, Golding spent his youth growing up on Everleigh Street in the suburb of Redfern – the eastern border to an Aboriginal-managed social housing district known as ‘The Block’. Golding’s childhood experiences and memories inform his photography, installation and mixed-media practice, as he explores not only his personal history but also a shared sense of cultural identity.

Golding was given a Batman cape when he was five. Since then he’s been wondering about who gets to be a hero and who doesn’t. Today, Dennis lives in Sydney and is from the Kamilaroi/Gamilaraay nation which is in northern New South Wales and crosses into Southern Queensland. In his work he explores strength, power and resilience. He invites us all to be super heroes.

'The year 5 students made connections between Golding's work and the use of super powers in works of art such as the movie Encanto and super heroes in popular culture. Students then designed a symbol or image to communicate their “super power”, which focused on gifts, talents and abilities. Cold wax was used to draw the design onto cotton/polyester fabric and sun dyes were painted using a paint brush. Students considered colours, symbols or images that represent their personality. Their final capes were displayed with a student artist statement about how the cape reflected their super power. All students loved this project including discovering each others super powers'. - Sharon Lynch, Visual Arts Coordinator, Immanuel Primary School 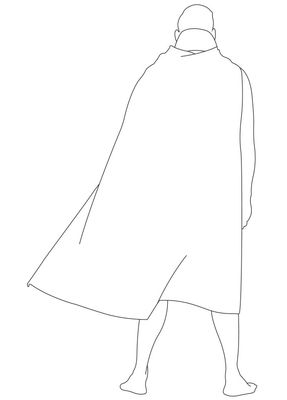