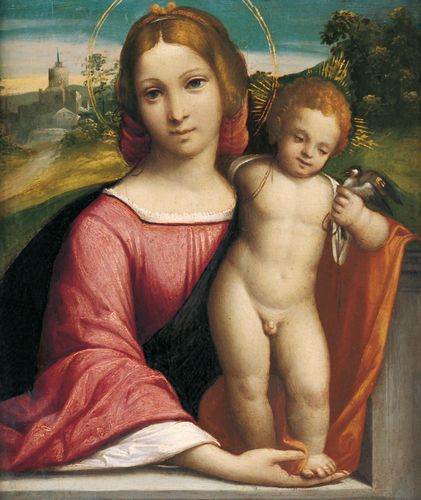 This painting of the infant Christ and the Virgin Mary dates from the High Renaissance – a brief three decades of astonishing artistic output when the creative geniuses Leonardo da Vinci, Michelangelo and Raphael were all active in Italy. Madonna and Child, a work of serene beauty from about 1510, was painted around the very time that Leonardo was creating his masterpiece the Mona Lisa and as Michelangelo was completing the frescoed ceiling of the Sistine Chapel.

In contrast to these celebrated public masterpieces, this more modest painting by Benvenuto Tisi – who was known as Il Garofalo – was almost certainly intended for private devotional use, at the home of its wealthy owner or perhaps when the owner was travelling.

Garofalo was a prolific painter of spiritually uplifting religious themes who has been called ‘the Raphael of Ferrara’, the northern Italian city with which he is most closely associated. In fact, soon after he painted Madonna and Child, Garofalo worked under Raphael in Rome on a series of frescoes in the Vatican, and the master’s influence on his work was considerable. Today, 500 years later, frescoes and major oil paintings by Garofalo still adorn churches and major buildings in Ferrara and his commissioned works can be found across northern Italy.

As well as major commissions, Garofalo also produced a number of paintings similar to the Madonna and child. This work is rich in symbolism. The Madonna wears a dress of red under a mantle of blue – an artistic convention suggesting that the Mother of God connected the human world of earth, blood and suffering to the divinity of heaven above. The child Christ clutches a dove, symbolising the holy spirit. The painting also reflects the enduring influences of Garofalo’s home town. His depiction of a standing infant Jesus follows a style preferred in Ferrara in the period. His Madonna’s distinctive almond-shaped eyes are also a trait of the Ferrara-born painter Boccaccio Boccaccino, to whom Garofalo had been indentured as a pupil.

Madonna and Child is a fine example of the artist’s work. From the beatific beauty of the Madonna’s face to the refined detail of folds in fabric, Garofalo conveys simplicity and grace yet renders it in elegance.