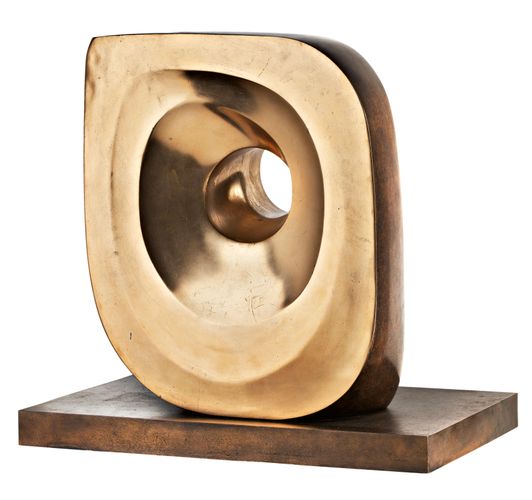 Barbara Hepworth was born in England in 1903.

A sculptor is an artist who makes sculptures.

Her great talent as an artist was noticed when she was young.

Because of her talent she was given a scholarship,

money to pay her school fees,

so she could study at Leeds School of Art.

Later she won another scholarship so she could study at the Royal College of Art.

This is an important art school in London.

Barbara started to become famous as an artist.

At the time, the arts world was led by men.

When World War II started, Barbara and her family moved to St Ives in Cornwall.

It is a town by the sea.

It is well-known as a good place for artists to work.

The move to Cornwall was only meant to be for a short time.

But Barbara found that her studio, a place for making art,

was great for making sculptures.

She lived and worked in St Ives for the rest of her life.

Her home and studio is now a public museum.

It is made of bronze,

a type of metal that is a yellowy-brown.

It is also highly polished,

rubbed to make it smooth and shiny.

Before making this sculpture, Barbara made another one the same

but in white marble,

a type of stone.

When Barbara became older, she made smaller bronze works like this one.

She stopped making sculptures that were cut and shaped from stone.

Barbara got ideas from sculptures made in ancient Egypt.

In ancient Egypt, Ra was the important god of the sun.

Like the sun, Barbara’s sculpture seems to have light coming from the inside.