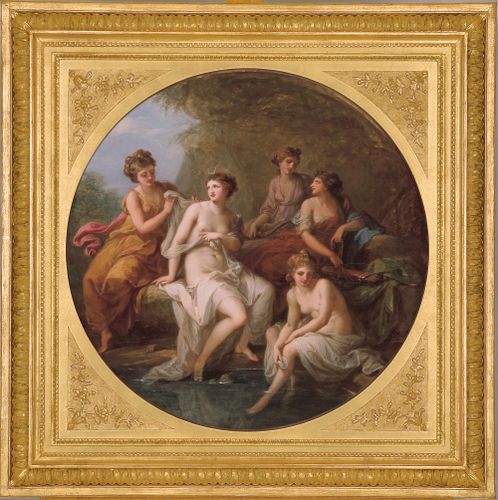 Angelica Kauffmann was born in Switzerland in 1741.

She first learnt to paint from her father.

He painted murals in churches.

Murals are paintings on walls.

In Europe in the 1700's, trained painters were mostly men.

Angelica Kauffmann was one of the few female painters.

Afterwards, she moved to England.

When she was 27, she was one of the very first members of the Royal Academy.

This was a famous group of the top artists in England.

It took 170 years before another woman artist joined the Royal Academy.

But the Academy would not let her do life drawings.

Life drawings are artists’ pictures of the naked human body.

The Academy thought it was wrong for women to draw naked people.

History paintings are stories from long ago.

The Academy also thought this was wrong.

Only men were able to paint history paintings.

Angelica was a leading painter in Rome and London.

Royals and rich people paid her to paint their picture, known as portraits.

Diana and her nymphs bathing is one of Angelica’s history paintings.

It is of the goddess Diana and her helpers relaxing in a pool of water.

She had a very light touch when she painted.

It is a history painting and has naked people – the two things that women artists were told they could not paint.

This painting shows Angelica was a skilled painter who would not be stopped for being a woman.