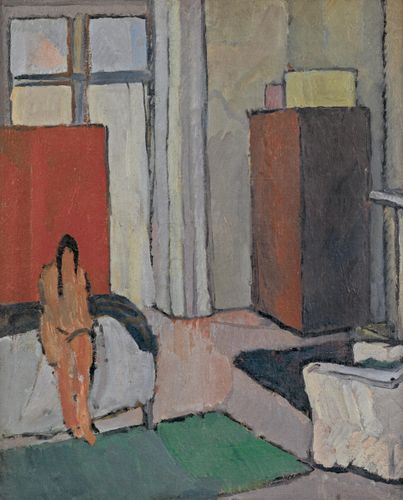 Vanessa Bell was born in London in 1879.

In the early 1900's, she was a member of the Bloomsbury Group.

The Bloomsbury Group was a group of important artists, writers and thinkers.

It was based in Bloomsbury in London.

Vanessa’s sister, Virginia Woolf, was also a member of the Bloomsbury Group.

She was a famous writer.

The Bloomsbury Group began when British art was thought of as old-fashioned.

Vanessa and other members of the group preferred modern art.

This portrait was painted in Bloomsbury in 1912.

The person in the picture is probably Vanessa herself.

This picture is inside Vanessa’s home.

Her home was at 46 Gordon Square, Bloomsbury.

Vanessa and her sister moved there after their parents died.

In this painting, the colours have thick black lines around the edge.

The woman in the painting is in her bedroom.

The room is painted to look tall.

This makes the woman look smaller.

She has no clothes on.

The portrait is unusual because the woman does not have a face, hands or feet.

But we can see that her shoulders are bent downwards.

And she looks lonely in the big room.

It looks as if she is having a moment of quiet thought.

In this painting, Vanessa’s feelings are open to everyone to see.

It is not only a portrait of how she looks on the outside.

It is a picture of how she feels on the inside.