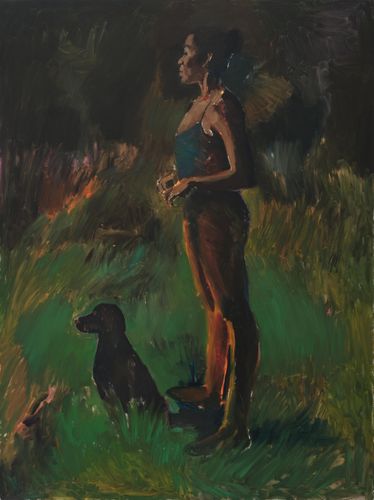 The Black Watchful is notably different to the portraits of women surrounding it on this wall.

This is not only because of Lynette Yiadom-Boakye’s lush use of muted colours or her loose, gestural style - in contrast to the painterly precision that is typical of realist portraiture. It is also because of her choice of subject.

Unlike the women around her, the female subject of this work is imaginary – she has only ever existed in paint. Yiadom-Boakye derives her subjects from composite sources, such as magazine photographs, scrapbooks and drawings. Her paintings have therefore been described as ‘portraits of society’ rather than of individuals, and her work has been likened to the literary genre of ‘realistic fiction’.

Significantly, her subjects are also people of colour. In the European portraiture tradition, portrait subjects have almost always been white – while the rare inclusions of African, Asian or First Nations people in portraits have often been intended to portray their imagined ‘exoticism’ or ‘otherness’. Yiadom-Boakye – a British artist of Ghanaian heritage – highlights and contests the historical eurocentrism of portraiture by depicting people of colour, engaging in everyday activities. She has said: ‘This is a political gesture for me. We’re used to looking at portraits of white people in painting.’

Portraits typically suggest the status and authority of their subjects, through such features as their clothing, hairstyle and jewellery, their stance or their setting. Here in The Black Watchful, Yiadom-Boakye embraces the visual language and conventions of portraiture, only to counter and subvert its usual encodings of power.

Her subject wears no fine clothing, no jewellery, dressed in a simple dark green leotard. Her setting is indeterminate – a sort of placelessness that perhaps hints at the dislocation of migrant families in Britain, such as the family of the artist herself. Yet the subject’s stance is athletic, strong and confident. And as in portraits from earlier centuries, the presence of her attentive dog suggests she commands dutiful support, imbuing her with a modest level of authority.

Yiadom-Boakye’s subject – an Everywoman of colour, an athletic figure of strength and casual self-assurance – confidently stands her ground, both in her painted setting and in the field of portraiture.

The Black Watchful by British artist Lynette Yiadom-Boakye. This oil on canvas work is 2m high by 1.5m wide. A woman standing outdoors, next to a seated dog. They are focusing on something out of frame to our left. Around them are lush grasses and shrubs. Between the brush strokes small areas of the white canvas show through.

In the centre of the painting, a dark-skinned woman stands in profile, bathed in light, a short shadow falls on the ground behind her. Her hair is swept up in a high bun, one eyebrow arches; light catches the swell and curve of her nose and cheek bone. She holds her chin level, with closed lips.

She wears a dark green, spaghetti strapped leotard and the golden glow falling on her body turns the fabric a greenish blue. Her collarbone and shoulder, touched by sunlight are accentuated in daubs of burnished red. Her arms are bent at the elbow, both hands in front of her body at waist height, her wrists are bent, and her fingers curled, as if she is holding a cylindrical object. Her legs are bare. She is standing with her feet slightly apart and washed in the sunlight, her right leg is bright orange below the knee.

The two figures are close to one another. The seated dog is as tall as her knees and they stand in a patch of bright emerald green grass, transfixed, looking off to our left. The black dog’s forelegs are obscured in the grass and in the stillness, the dog’s tail is at rest, ending in the shadows between its feet.

Messy grass and shrubs in upwards strokes of khaki, lime and orange, mixed with black and yellow, surround the immediate bright circle of woman and dog. Behind them, taller, shadowy vegetation in dark sage, muted forest green, black and grey.

In the upper left, the artist’s signature in black - ‘Lynette Yiadom-Boakye 2008’.