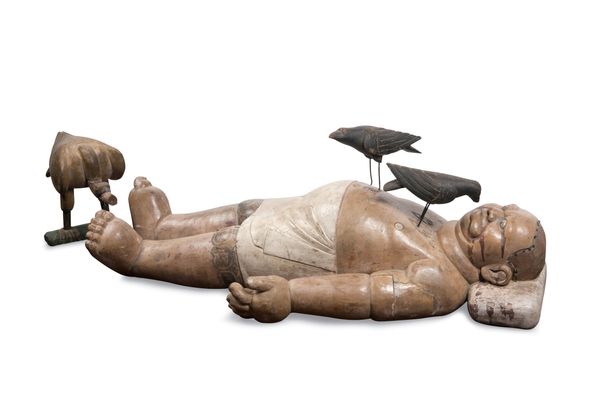 This sculpture displays a confronting level of detail only gleaned from first-hand observation of the transformation of a body after death. The bloated extremities, bodily fluids leaking from under the bulging eyes, swollen tongue protruding from the mouth as well as a vulture and crows feasting on the remains are evidence of the process of decay and ultimately dissolution. This was a common sight at cremation grounds and cemeteries in Burma when this work was made around 1900. The unknown artist has gone to great lengths to present a realistic body and has even included tattoos and, at one time, a hairpiece, as shown by the nails along the hairline.

Death was the third sculpture in a set of four, commonly known in Buddhism as the Four Sights, and was once installed in a Burmese monastery setting. Four Sights refers to the defining episode in the life of Prince Siddhartha, when he ventured out beyond the walls of his father’s palace for the first time and saw an old man, a sick man, a corpse and an ascetic, and was filled with revulsion at his luxurious existence.

Four Sights functions as a reminder of Siddhartha’s decision to renounce his father’s kingdom and embark on a spiritual search for inner peace. This journey culminated in his achieving enlightenment at Bodhgaya, northern India, from which moment he became known as the Buddha, or the Fully Awakened One.

One of the key teachings of Buddhism is that an understanding of the reality of death – here graphically depicted – can lead to profound wisdom and peace of mind. Contemplation on the impermanence of the body became an increasingly popular subject in Southeast Asia during the nineteenth century. It appears in temple mural paintings, cloth banners and manuscript illustrations as well as in sculptures. It is possible that the subject developed in monastery art as a substitute for actual graveyard contemplations at a time of changing mortuary practices. Cemeteries were once very unpleasant places littered with the remains of rotting corpses after secondary burial or wood-pyre cremation – places fit for scavengers like vultures and crows or for monks’ meditations on the transience of bodily life.

Death, the third of four sights seen by Prince Siddhartha comprises a corpulent corpse in a state of decomposition, bloated and lying down.

The small wooden body and birds invites consideration without overwhelming revulsion. Pale and yellowish, his swollen head rests atop two chins, the weight of the head propped up by a once-white, small, rectangular pillow. There are bloodstains on the pillow below the left, fleshy ear.

A hair piece has been removed from the top of the figures head and a line of round-tipped nails journey in a neat row from ear, across the high forehead, to ear.

The figures face is cracked and marred; a thick welt of a worry line between his bugling, open eyes. Blood that once oozed from his left eyeball has dried in a path ending at his right ear. Beneath a bulbous nose, a slack and swollen tongue protrudes, lolling to the left. A crow, frozen mid-peck, seeks the meat from inside the man’s right cheek. Blood trickles in a thick painted line into a chin fold.

Above white, carved, round nipples the crow’s feet are etched into the wood of the figure’s chest. The figure’s carved, tubular arms rest by his sides and there is a stepped cut in the wood above each elbow, as though the lower arms and hands are made from another piece of wood. Above the stepped cut on the body’s left arm is a long crack from age and wear.

A second carved crow looks up and out. The crow is black with markings to define shorter feathers at it’s chest; and long lines carved into the pointed rear half suggest wing feathers. The crow’s bloodied feet stand on the corpse, it’s thin wire legs rising up from the figure to join it’s darkly painted body.

A waist wrap (thick, carved strip of dirty, almost creaseless) once-white material serves to cover the corpse, from mid belly to mid-thigh. Tattoos of square patterns with rounded edges repeat, traveling around the knee on both legs, with squiggles and dotted lines. They cover his knees and lead down to trunk-like calves and swollen feet with neatly rendered toenails.

Just below beyond his feet – within its mouth a morsel the same colour as the cadaver- is a vulture, its talons wrapped around an oblong, grey perch. The vulture’s head and nape curve into an ‘S’, the bird is concentrating on its task. It hunches, bending low, giving its wings definition and shape. It’s wing tips meet and neat, curved lines suggest wing feathers. Small, arched indentations depict other plumage.

As a result of time, the figure’s smooth, painted surface is well worn and displays a patina. A close look reveals the anonymous artist’s brushstrokes which contrast the pattern of the woodgrain at the left arm, and below the white cloth carved into the body, and on his left inner thigh,- a process of decay continuing, befitting the sculpture’s theme.