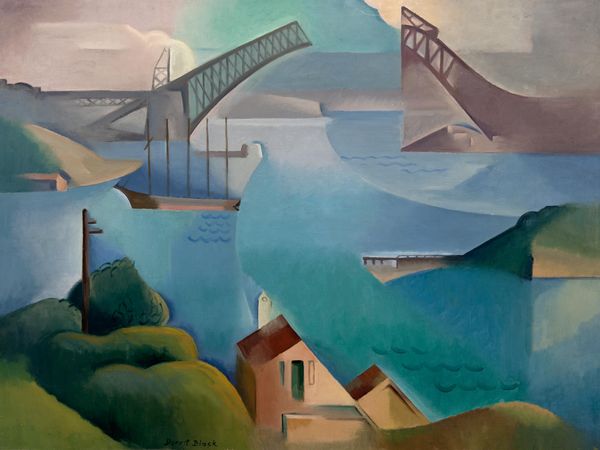 Adelaide-born Dorrit Black was a painter and printmaker who completed her formal studies at the South Australian School of Arts and Crafts in around 1914 and then continued her training in Sydney at Julian Ashton’s Sydney Art School. By 1927 she was studying modern art in London and the following year her painting practice was transformed when she studied cubism in Paris. After coming back to Australia in late 1929, she committed her life to advocating modern art through her own art and teaching. In 1931 she established the Modern Art Centre in Margaret Street, Sydney and became the first woman in Australia to run an art gallery. She later returned to live in Adelaide and in 1939 she designed and built her own home and studio in Magill, an Adelaide foothills suburb, east of the city.

The Bridge is an oil painting by Black in 1930 which depicts the Sydney Harbour Bridge under construction. Painted immediately after completing her cubism lessons in France, The Bridge is regarded as Australia’s earliest cubist landscape painting. Although Black has fragmented and simplified elements to conform to geometry, the scene is cohesive and identifiable. The view is taken from Sydney’s Balls Head reserve and captures a side elevation of the two incomplete curved arches of the bridge, the harbour waters in the centre and houses in the foreground.

Cleverly, Black has composed this composition so that our eye moves across the picture plane from early morning dawn on left, to evening on the right. In this way, she’s referencing the cyclical nature of time and modern progress. The span of time is further symbolised through the inclusion of a nineteenth century masted clipper anchored in the harbour and the modern electricity pole. The artist’s depiction of the Bridge captures a spirit of excitement, and celebrates the dramatic engineering advancements being made during the Great Depression and giving the Sydney community hope for the future.

Officially opened in 1932 the Sydney Harbour Bridge remains the world’s largest steel arch bridge and was inspiration for many artists during the time including Harold Cazneaux, Grace Cossington Smith, Frank Hinder and Margaret Preston.