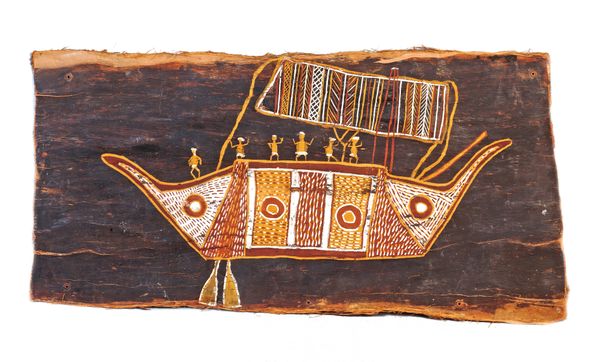 Minimini Numalkiyiya Mamarika was an Anindilyakwa artist from Groote Eylandt situated in the pristine waters of the Arafura Sea in the Gulf of Carpentaria, far north east Arnhem Land Northern Territory, Australia. He was born in 1904 and died in 1972.

Mitjunga, Malay Prau is a bark painting made in 1948 by Mamarika and depicts a perahu, a wind powered vessel complete with its crew of Makassan fisherman from the Port of Makassa in South Sulawesi, Indonesia. A perahu is a multi-hulled wooden boat powered by wind.

Mitjunga, Malay Prau is painted on stringy bark (Eucalyptus tetrodonta) which is harvested in the wet season. Once the bark is flattened and dried it is painted with natural earth pigments.

The title of this work came from a Colonial era when Indonesian people were referred to as Malay. We know now that the people depicted in this painting were actually Makassan and Bugis fisherman who for hundreds of years sailed each December during the tropical wet season from their homes in south east Asia to the coast of Arnhem Land to fish for trepang, otherwise known as sea cucumber or bêche-de-mer. The Makassans also traded items such as metal axes, cloth and rice in exchange for exotic goods such as pearl fish, turtle shell and cypress-pine wood. After 1901 the South Australian Government banned this trade with the purpose of developing a national trepang industry, with the last perahu leaving Arnhem land in 1907.

In 1948 Charles Mountford, an amateur ethnologist, a film maker and lecturer, lead a group of 16 members of the American- Australian Scientific Expedition to Arnhem Land to observe the life of Aboriginal people in order to learn how they managed their environment and to collect cultural material from them. Mountford collected a total of five hundred paintings on bark which were later distributed amongst six capital city galleries in Australia. At least five of these works were by Mamarika, but Mitjunga, Malay Prau was not included in this distribution. It was donated to the Art Gallery of South Australia by Mountford in 1960.

This particular bark painting is linked with the island Junbia just off shore from Bickerton island, one of the islands in the group island archipelago believed to have once been a malay prau. This bark painting does not simply represent a prau, it represents an ancestral prau which is related to the formation of the islands, and to a place of significance.

The circles on the hull refer to the holes in the totemic rock at Junbia. Although Mitjunga Malay Prau was painted in the twentieth century it shows that the frequent connection with the Makassans influenced Aboriginal life incorporating these stories into their history and language.

Given Mamarika’s date of birth, it is likely he witnessed the Makassan’s fishing on Groote Eylandt and either depicted this image from memory or oral tradition, or was inspired by rock paintings in Arnhem Land of the perahu.
Oral culture is rich with traces of this exchange evident in storytelling.